Water Pollution in Minotola, NJ that effected the residential citizens and businesses nearby in the 1980s

Minotola, NJ is a small city located in Atlantic County. The racial population consists of 82% White, 10.3% African American, Hispanic 13.3%, Indian 2.7%, and other races that are less than 2%. South Jersey Clothing Company is a store that was located on 1 Central Ave in Minotola, NJ. The company operated from the 1940s to the 1980s. It produced military uniforms and dry cleaned them. However, The South Jersey Clothing Company produced hazardous chemicals in their dry-cleaning wastewater called tetrachloroethylene and trichoichloroethylene that were dumped on the ground then into the soil, then into the water. This catastrophic event affected other businesses nearby and the residential citizens drinking water supply. NJDEP launched an investigation and found that the water was contaminated with high levels of tetrachloroethylene and trichoichloroethylene 12,000 parts per billion. This discharge of the waste was done without the consent of NJDEP. South Jersey Clothing Company has been dumping its waste without the permission of NJDEP from 1972 to 1981.  Who was affected and how? The local residents were affected considering that it contaminated their drinking water. Other establishments nearby were affected considering that they had to close their stores. What do local community people do to try and fight back? The community became involved and a lawsuit was filed against South Jersey Clothing Company. What is the larger significance? The larger significance is that scholars such as  Robert Bullard, Andrew Hurley & Max Liboiron argue that environmental injustice does not occur in white residential areas. My research shows that environmental injustice does occur in white residential areas.

Iona Smith is a graduate student in the School of Management at the New Jersey Institute of Technology in the MBA Program. I also have an MSM degree in Master of Science in Management. I am drawn to write about the water contamination of tetrachloroethylend, trichoichloroethylene, and how it affected the water supply of the citizens in Minotola, NJ, and other establishments nearby.

Scott Orr is a reporter for the Star Ledger Newspaper. He addresses the concerns from Senator Lautenberg about the superfund budget from the federal government to clean up the toxic waste in the State of New Jersey. The reporter describes that South Jersey Clothing Store being irresponsible for the contamination of the residential drinking water in Minotola, NJ. This article will help me understand the environmental injustice that occurred and how the federal government is intervening to address the issue.

This report contains information about toxic substances that was discovered by NJDEP at responsible industry locations. This report will help me understand what contributed the pollution of Minotola, NJ.

This report was prepared from the US EPA.  This report contains a five year review “is to assure that implemented remedies protect public health and the environment and that they function as intended by the decision documents” US EPA.   This report will help me understand why South Jersey was put on the Superfund List to clean up the toxic waste that was produced by industries.

This article talks about the background of South Jersey Clothing Company including the waste, clean up and the new take over. This article will help me understand how the pollution was created and what was done to help clean it up.

In 1994, the once idealistic suburban community of the White American dream that was present in San Fernando Valley, is being overwhelmed with new migration of Latino and Asian into the valley. The growth of Latino, Asian, and few other minority communities are growing rapidly within the valley, already consisting one third of the population. The existing white communities strongly supported the removal of illegal migrant “invaders” into the valley with the voting of Proposition 187, while legal Latinos, particularly students, in the valley were angered and protested against Proposition 187. It also highlights the hypocrisy of the attempt of Whites to expel the illegal immigrants, whom they hire to work for them. Overall, the San Fernando Valley in 1994 sends a clear message in racial polarization and on-going ethnic tensions between Latino and White communities living besides each other during this time period.

From the beginning of the article, Andrew Murr mentions the Valley girl, an iconic movie that was based on San Fernando Valley white suburban culture in the past. But now, Murr claims, “[T]oday’s Valley Girl is as likely to be Latina or Asian as White,” implying how much the valley changed by 1994, that it is no longer only white, but includes Latino and Asian cultures. The narrative continues onto the brief mentioning of the Northridge Earthquake, where the once regretted freeway that separated the neighborhood, “…people are glad those barriers are there,” after the earthquake. The relieve by the freeway separation, reveals the physical-emotional racial lines that existed in San Fernando Valley, the sense of security that the freeway provided for the white community, only admitting its existence after a natural disaster, previously denying its existence as regretful. Confrontations of ethnicities followed especially after the earthquake and Proposition 187, in which one quote stated; “…Latino students and activists waved Mexican flags at anti-Prop 187 rallies, an expression of pride and alienation that many whites mistook for defiance of American values.” This quote, where Whites conveniently “mistook” the Latino response as “defiance,” presents not only the biased forgiveness towards White groups, but the two conflicting sides of this issue, where Latinos wants recognition through the protests, while Whites see it as a threat, perhaps to the security of the white community, desperately grasping onto the past image of the Valley Girl, and the security of the freeway barrier. Thus, the ethnic struggle continues between the Latino community whom are seeking acceptance and recognition as part of the new Valley girl image, and the White community whom feels threatened, chasing their past Valley girl image that no longer exists in San Fernando Valley.

This article deliberately found and cited the human effects of Tetrachloroethylene. Tetrachloroethylene is also known as PCE.  The paper provides me information about the usage of PCE and its detrimental effects.  This is an environmental injustice toxic that I am familiar with.

This research article contains expert knowledge about the toxicology of chemical research about TCE exposure.  This source of information provides with affect of environmental and human exposure of TCE.

This research article consists of information about Tetrachloroethylene and what it is used for. This article will give me a closer insight of Tetrachloroethylene usages and damages. It will also provide me with the environmental injustice it has caused. 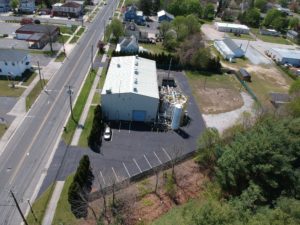 In the middle of this photo contains a clothing manufacturer that produced military clothing in a suburb area of New Jersey. This operation was also located in an industrial and residential field. It is accompanied by a clear blue sky with sunshine. This establishment has been around for many years. During its production of clothing, it also produced hazardous waste in the residential drinking water.
According to the New Jersey Department of Environmental Protection, On April 3, 1981, a resident from Minotola, NJ made a phone call complaint. The resident complained about a strong odor that came from her drinking water. An inspection was launched by the NJDEP for the residential drinking water. “A subsequent investigation by NJDEP revealed that water from the resident’s well had levels of Trichoroethene (TCE) as high as 12,000 parts per billion (ppb), along with Tetrachloroethene (PCE) 43,00 ppb” NJDEP. The NJDEP investigation revealed that the company owner from South Jersey Clothing Company performed the hazardous waste methods between 1971 and 1981. “This method included the disposals of waste on the ground in areas around the building and train tracks” NJDEP. This has caused environmental justice to the residents and nearby companies of Minotola NJ. The South Jersey Clothing Company did not have the authorization to drop its wastewater on the soil.

According to the depiction supplied above, this image was taken at the location where the company was established. This image shows the South Jersey Clothing Company Facility from a sky angle. The image was taken by the New Jersey Department of Protection and the Federal EPA prior to the destruction of the company. The complete demolition of the South Jersey Clothing Company was on May 1997. This image was taken for local politicians, federal politicians, and the news correspondence to take action on the toxic waste clean-ups. The South Jersey Clothing Company was published in the Star-Ledger Newspaper about the hazardous chemicals that the company produced while they were in operation. The newspaper article was published for the attention of the local residents and the politicians. The newspaper addressed SJCC being placed on the national priority list. This includes putting Minotola, NJ on the national priority list. The EPA’s national priority list consists of a superfund program that provides a monetary budget to clean up the hazardous waste that was produced by companies. The other documents about this image consist of reports that were typed by state and federal officials’ assessments about the hazardous conditions and how to fix them.

Furthermore, while analyzing the image, there were no examiners outside the location of the facility doing an investigation. However, concerned residents of this town and other establishments are concerned about this contamination affecting their drinking water. The image does not depict local, state, & federal authorities acknowledging the concerns of the local residents or other business establishments. Not to mention, when officials are investigating an incident, the yellow caution tape is wrapped around the building and or properties. The yellow tape of caution means for the general public not to enter the investigation space. Although it can be disputed that, environmental injustice is a priority for everyone. Would this incident happen in an affluent white area? This image represents the inequity of environmental injustice due to class of people by income differences considering that the toxic waste was performed in a non-rich area.

Another thing to consider is that this image suggests that South Jersey Clothing Company would only exist in an industrial area of a non-affluent area. Most industrial areas are placed in non-priority communities that produce toxic waste. This further demonstrates the environmental injustice inequity.
The image also portrays what locations a business can operate in. It shows a suburb area of NJ that does not have high relevance for environmental injustice concerns. The image shows alongside the company there are residential homes. It also illustrates the social status of the community.
As a final point, the image shows that a company operated in a non-affluent area. The environmental injustice to place there because of the social status of the residents in this city.