Sargassum on Vacation: Algal Blooms as an Impetus for Social and Environmental Change on Mexican Caribbean

Sargassum on Vacation represents a single research inquiry of a larger anticipated thesis topic on the Sargasso Sea. The project and my thesis will reflect the coalescence of both my personal and academic life. Currently, I am a part-time graduate student at Rutgers University-Newark where I study history with a content specialty in Environmental History. On a full-time basis I am a middle school social studies teacher at an independent school in the Princeton, New Jersey area where I also co-chair the Sustainability Committee. In my undergraduate years, I was an American Studies major, a field that taught me to value and prioritize civic action around topics of injustice and inequity. Simultaneously, I also used my undergraduate years to explore maritime studies. Having grown up along the coast of southeastern Connecticut, I have always been interested in ocean systems and human interactions with and on the water. As I began exploring this history I recognized quickly that ocean history is environmental history—an environmental history, I would argue, that has large implications for the world as we face the consequences of climate change. I see this project and my thesis as sites where I can uncover the significant nature of ocean history but where I can also inspire action.

This project will focus on the Mexican Caribbean. Specifically, it will highlight the beach towns on the island of Cozumel and the communities of the eastern Yucatan roughly from Cancun in the North to Tulum in the South. This area comprises around 80 miles of coastline that relies on the tourism industry for economic stability. 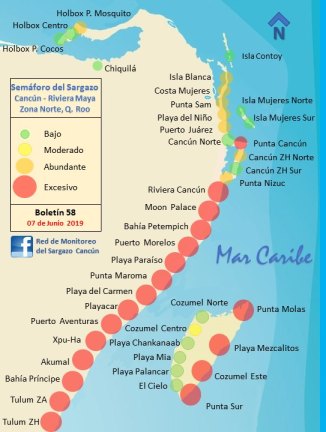 Beginning in the 1970s, this coastline was developed by resort and hotel companies. Municipal and state governments played and continue to play a large role in supporting and financing development efforts and regulating tourism. As a result, the entire shoreline is scattered with resort after resort where people from all around the world come to lounge on the beach. Beginning in 2011 Sargassum, a microalgae that grows in large mats and acts as protective habitat for many small sea creatures, began washing ashore in large quantities. As the years have progressed the amount of Sargassum that has appeared on the Mexican Caribbean Coast has only increased. The seaweed when washed ashore brings with it many problems including foul odors and the release of sulphur fumes that rust metals and cause respiratory problems. The tourist industry and environmentalists in particular are concerned about the impact of these profound inundations.

Research attempting to determine the cause of these algal blooms is still largely uncertain. Thanks to a study completed by a group from the University of South Florida using both satellite imaging and sea water collection data, there is now some reason to believe that the blooms are occurring because of warming ocean waters and because of fertilizer run-off coming from the Amazon River and rivers in West Africa.

Regardless of the cause, Mexican Caribbean communities largely made up of a Mayan and Mestizo working class are faced with spending the money and time to determine and enact the necessary measures to remove the seaweed daily from the beaches. This is all in order to tend to the needs of a mainly white tourist clientele. In the meantime, these laborers are working more hours and exposing themselves to potential respiratory problems in order to provide the beach experience that vacationers are looking for. This group of laborers already face social and environmental inequalities because of large tourist development along the coast. It is also highly gendered, as the roles prescribed to men and women workers are quite finite. Women often work housekeeping and men complete landscape or facilities maintenance jobs. As these events have progressed the Mexican government has stepped in to aid in the cleanup and removal of the seaweed, but some municipalities, many of which led by women in particular, seem to also have enacted effective mitigation efforts for the Sargassum problem without aid from the federal government.

In this project, I will study the history of Mexican Caribbean tourism alongside the story of the Sargassum because I want to better understand the context of a current circumstance in order to explore the possibilities for how that circumstance can be solved. As I work to uncover the actors involved, the structures in place, and the science behind what is generating the Sargassum problem, I hope to gain insight into how Caribbean communities can better deal with these massive inundations.