1: Passaic River, Long Marred by Toxic Dumping, Will Be Cleaned

This news article in the New York times talks about the attempted cleanup of the Passaic River, specifically an 8 mile stretch from the Newark Bay inlet to the Newark-Bellville border. This source includes the toxins that have contaminated this body of water for so long. This article gives the perspective of politicians, environmental workers,and the citizens who are affected by the Passaic River, and having that information is going to help.

Although this isn’t a long article, it’s full of information that I did not have before. The biggest piece of information that I took away from this article is that the Passaic River was declared a superfund site in 1984, and the chemicals that the river is contaminated with. This information will help me connect some dots along this process of answering the topic question surrounding this whole paper.

This news article was published by Anthony DePalma in 2012, and he writes about the problems faced when trying to clean up the superfund site that is the Passaic River. I find this article to be important because it explains the history of the superfund and then explains how extensive the cleanup process is. This article gives me an abundance of information that allows me to have knowledge about multiple aspects of this topic. 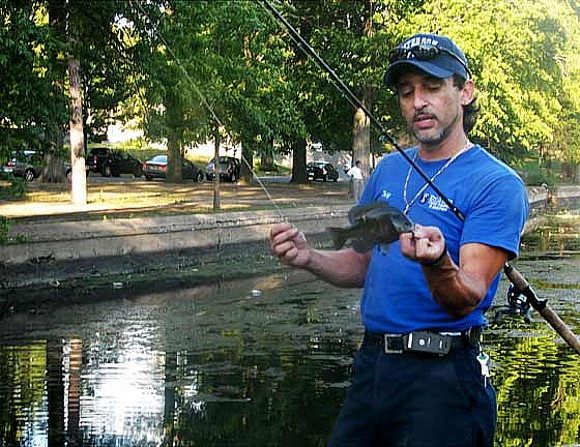 This is a photo of a man named Tony Falcon holding a fish on the Passaic River in Paterson, New Jersey. As you can see, there is plenty of build-up on the surface of the water. Safe fishing water does not have that mucky substance that you see pictured here. This contamination is not good for the fish or the people fishing. This is just good hard picture evidence that people face everyday while fishing.

This news source is from US States News, and it focuses on the states displeasure with the companies that knowingly dumped dioxin into the Passaic River. This article highlights the fishing struggles that the Passaic River poses. For over 20 years the state has advised people not to fish in the river, yet people continue to catch, and keep fish out of the Passaic River. I am using this source as a bridge towards finding out why people continue to fish these waters even though they’ve continuously been told not to.

I have chosen to analyze this source for a multitude of reasons. Reported by Noah Remnick and Rick Rojas in 2016, we read about the push made to clean up the Passaic river that stretches over 80 miles throughout Northern New Jersey. Although fishing is the main focus of my paper, I think that it’s important to research the reason why fishing is so difficult throughout Newark along the Passaic River. This source is beneficial to my paper because it not only highlights the fishing problems, but Remnick and Rojas went a step further and also highlighted the efforts that were being made to solve whatever was causing the problems in the first part.

One of the first things that stuck out to me while reading this article was a quote given by Former Mayor of Newark, Corey Booker. He stated “ the damage that has been done, the lives that have been affected, the disease that has been spread, the theft from opportunity.” Later in that interview Booker also stated that the people ‘bore the costs’ of this dangerous water. Those two quotes show me that the citizens of Newark have suffered for years over something that they didn’t take any part in. The dioxin and lead that was dumped by these sites literally left the City of Newark out to dry. The people of Newark have gone years and years without clean water, and it’s not even their fault. Cory Booker using the term ‘theft for opportunity’ really made me think about all the fishermen throughout Newark that were missing out on making a living because of how dangerous the water is. Being able to use that information throughout my paper is going to help me immensely. This article supports both the efforts being made to fix this environmental injustice and a background on why the Passaic River throughout Newark has gotten so contaminated.

When I started this project, one of the questions I wanted to answer out of personal interest was whether or not the contamination was a result of pollution from the City of Newark, or contamination/toxins were dumped by the companies that sit along the Riverfront. After analyzing this source, I realized that it’s probably a smart idea to incorporate this aspect into my paper somehow. There is a paragraph in this article that highlights a very interesting piece of information, and it talks about the toxin created and dumped right here in Newark.  During the Vietnam War there was a herbicide created called Agent Orange. Agent Orange was used to defoliate forests in the war. This herbicide was created by Diamond Alkali Company, which sat right along the Passaic River in Newark. What was happening was the toxic sludge from Agent Orange was being drained into the river creating a ton of issues that this article highlights.

My last piece of evidence that supports my topic focuses on the efforts made to clean up the river. People relied and still do rely on the Passaic River as a source of catching and keeping fish. The Newark Bay and Passaic River used to be great fishing spots, but when the superfund sites started dumping into the river the entire area was ruined. The quote that I am going to reference supports the clean-up of the Passaic, but also helps explain why the water crisis throughout Newark hasn’t been completely solved. Jeff Tittle, director of the Sierra Club of New Jersey stated “something was better than nothing” and “the Passaic River cleanup was more about expedience than doing what’s right for the river”. I think the quote shows part of the reason as to why the river hasn’t been completely cleaned, and I took him as saying that was never really the goal. This information shows that there’s been an effort to clean up the water so people can fish freely, but not the effort that both the river and the people of Newark deserve.