-This is an article from the website Insider NJ. This article provides facts and numbers from a study done by The New School in New York City. The article raises an important point of how 80 percent of the incinerators nationwide are built in a minority community. Four of these are built-in minority cities of New Jersey such as Camden, Rahway, Westville, and Newark. Even though my paper only concerns with the Incinerator in the Newark-Ironbound neighborhood. This source helps me prove my point of how the minority community of Ironbound is undermined and the government just looks the other way

-This source is an article written by The New York Times on Feb 21, 1988. The reading talks about how Ironbound had lost its battle against the building of the garbage incinerator. The reading mentions how the community had protested against the incinerator for but cooperation and the governments ignored its people and built the plant. This source will help me prove the point that people’s concerns were ignored. It also proves the point that despite there being known harms to the garbage incineration before the plants’ construction the plants were built to, this shows the carelessness of the people responsible for the plant.

-This source is an article from the website NJ.com from Dec 2009 and was later updated in Apr 2019. The article provides information regarding what the plant has done and its impact since its opening. It talks about the 900 violations the Covanta has committed. I also talk about the changes the corporation has made to make the plant “safer”. I am going to use this article to demonstrate even after almost thirty years of being open it is still harming the community of the Ironbound. With this source, I can also talk about this issue at a corporate and government point of view, as this article brings how the port authority and Covanta see and deal with this issue.

This source is an online article from a website called Earthjustice, dated Oct 23, 2019. It is very similar to source three, as it talks about the pink smoke the plant produces from burning Iodine. However, unlike source three it does not give the corporate and government point of view. I am going to use this source similarly to how I used source three; in respect of how despite harms of the plant it is still burning garbage daily and harming the minorities of Ironbound.

-This source is a section from the Ironbound Voices which was written and printed by the Ironbound Community Corporation. This particular section is from 1986 and is about the march against the incinerator. The reading talks about there being people of different ethnicity making signs and shouting chants in their languages. This source will help me talk about how the minority group tried to protest the incinerator before it opened. I hope to use many other postings from Ironbound Voices as they all provide context to how the Ironbound community fought and was impacted by the garbage incinerator. 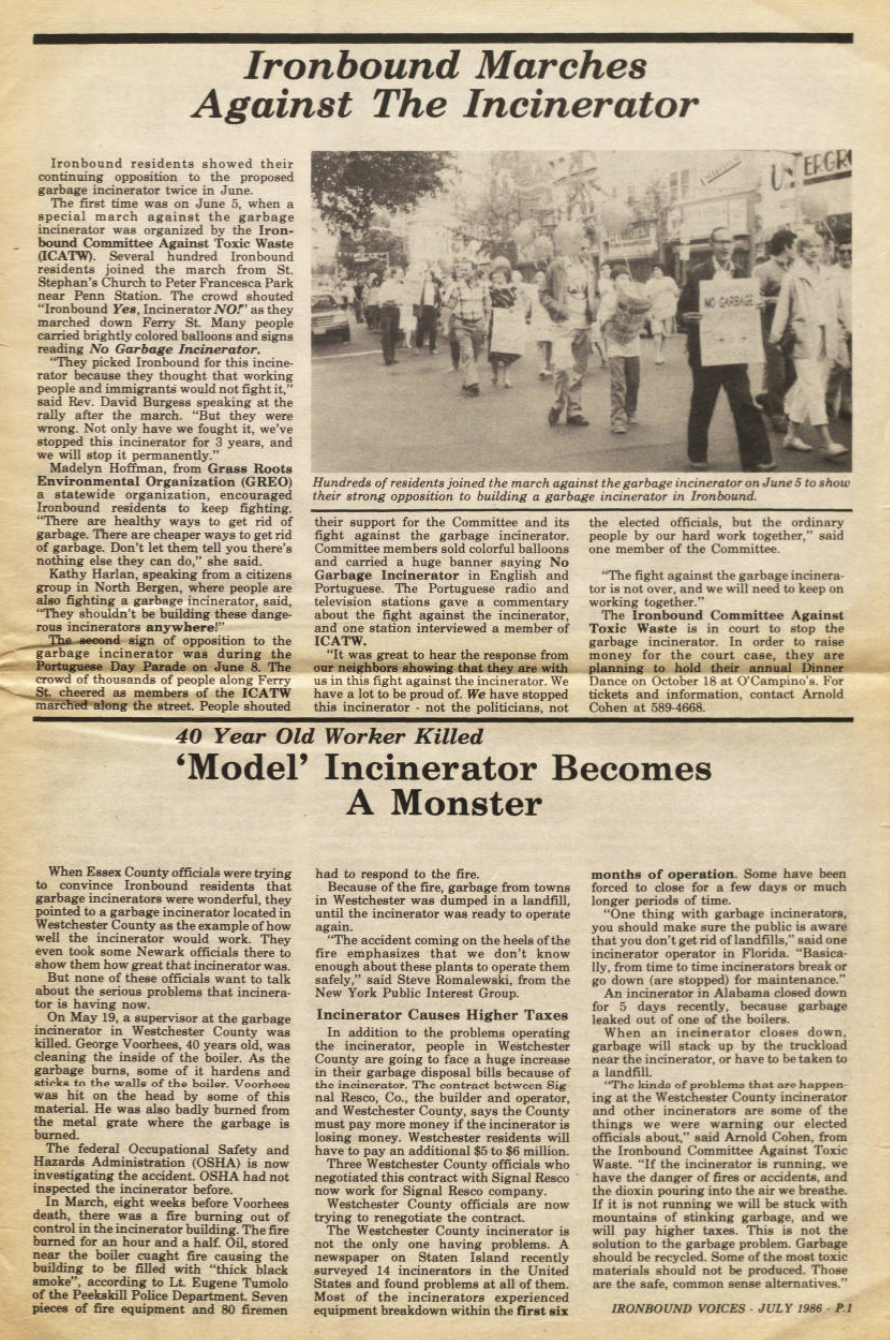