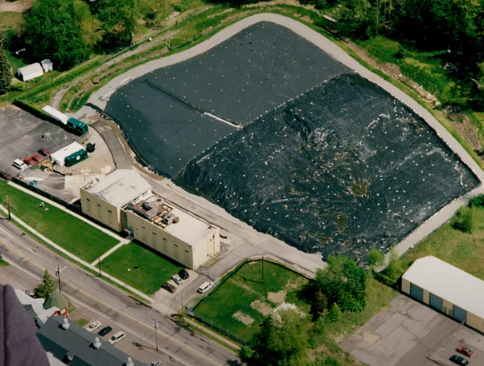 Pictured above is a small refinement facility owned by Rare Earths Inc, and later purchased by W. R. Grace in 1957. Located in the Passaic town of Wayne, NJ, the site is located on a main road near several houses and small neighborhoods. From 1948 to 1971 the site was used to refine sand into various rare-earth metals. What was not known at the time was that the soil also contained harmful radioactive materials such as thorium, uranium, and radium.

This aerial image was taken in the late 1970’s by the EPA while it was conducting an investigation into the site. The original image was black and white, and has since been digitally colorized. This photograph shows the size of the site’s materials storage as well as its proximity to nearby residences, who had to deal with such a site existing next door for several years due to state negligence and stalling of cleanup efforts.

This photo is representative of the gross negligence and oversight of government agencies to regulate and balance commercial and residential needs in the post-WWII United States. The large site was created and operated next to large residential neighborhoods, and state and federal response to the cleanup was delayed due to either negligence or intentional delaying of cleanup efforts as a result of the desire to hide or reduce the publicity of the event.