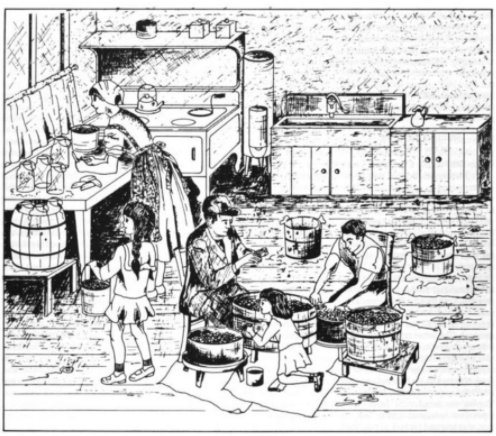 The image depicts a family of five that is working together on making a meal. The father, who is also a fisherman, cleans the oysters with his son and daughter while another daughter brings the cleaned shellfish to the mother who packages them into jars for later use. This image makes the viewer see that oysters are an important part of a family dynamic as it brings them closer together. This is very important in areas like Raritan Bay and the Arthur Kill River as those areas have neighboring towns where the family structure may be not as strong.

This image was made in the 1930’s when oysters were in abundance so most fishermen were able to not only provide monetary stability but also bring food for the family. The image was produced for a paper about the history of fishing in the area around Raritan Bay. It used data collected from fisherman interviews in order to show the average fisherman household. Knowing what the average household did with its prosperity leads the viewer to see how important these shellfish are to the community and the people that live there.

The image shows five family members all working together to prepare their meal. They have cleared their kitchen for this one task to do all together. This shows that the existence of the oysters lead to closer family ties. Although it wasn’t the sole event that kept families together it definitely did not hurt them. The time family shares preparing dinner and overall spending time together creates stronger bonding. These bonds are great for the community as a strong family can help themselves as well as others. Strong communities stem from creating strong family ties within the community.

The barrels full of clams leads the viewer of this image to assume that the clams were very abundant. Being a fisherman allows for the fisher to bring food to his family when the harvest is plentiful. This image shows that the harvests are very fruitful and so he is able to not only provide income for the family but also feed them. With an abundance of clams families can be certain that food will not be a priority and thus choose to focus their efforts on other things like helping better the environment and the area they live in.

Although the barrels are plentiful this does not mean that the family isn’t struggling in other ways. Fishermen weren’t known to be the richest of people. With the loss of water crops the people to first lose their work would be the fisherman. This would put strain on the families who rely on the water for their existence. When the population dies off the people will have to find new ways to survive which can cause massive tension between the members of the community.

Through the image a message of family cohesiveness is conveyed. The abundance of shellfish lets the viewer know that these products were a livelihood for a group of people. With this abundance comes food that needs to be prepared by the family. This preparation allows for the whole family to get involved creating stronger family ties. When family ties get strained the community can fall as a whole. Creating unrest in a way of life. Areas like Raritan Bay and the Arthur Kill river saw this unrest. When many fishermen lost their ability to provide an income the family struggled and so had to find new forms of cash flow. With the growing job loss due to pollution this problem becomes more and more prevalent. Due to the loss of harvestable area overpopulation has also become an issue. With overpopulation the amount of fishermen also decreases. A chain of events can start a massive loss of jobs and a long standing way of life that brings great local oysters to the people of Raritan Bay.