In the city of Newark, New Jersey, pet owners are disproportionately offered resources to care for and maintain their pets in a pattern that correlates with both skin color and income. Newark is the largest city in New Jersey with an estimated population of 282,011 people as of 2019. It is also the second-most racially diverse city in the state with 89% of the population consisting of minority, non-white residents. Approximately one third of the entire city is living in poverty, which is vastly higher than the state average of around nine percent. A study conducted in 2012 by St. Hubert’s Animal Welfare Center estimated that half of all households in Newark owned pets, a trend common amongst New Jersey municipalities and reflective of the overall state rate of pet ownership. However, despite the same rate of pet households as any other NJ city, there are drastic differences in the amount of resources available to the residents of Newark. Pet owners in the city, who are overwhelmingly people of color and low-income, are offered little to no access to medical care for their animals. This can deteriorate the human-pet bond that so many cherish and in some cases inhibit it altogether, imposing unjust limitations on the privileges of people to enter into and enjoy that relationship.

In comparing Newark with the surrounding towns and cities, you can see that Newark is disproportionately different from its neighbors. Nearly the entire city falls into the range of having a household income less than $49,043 or less. East Orange, Orange, Irvington, Elizabeth, and Jersey City also share similar income regions. This is no surprise, as these are all heavily populated urban areas with many factors that drive the cost of living down. They are also communities with the highest percentages of people of color living there, which is the result of the area’s long history with “white flight,” suburbanization, and the systematic oppression of minority communities by local, state, and federal policies. The disproportionate rate of social vulnerability (a measure by the CDC that calculates the potential negative effects on a community caused by external stresses to human health) in Newark is particularly jarring, albeit yet another documented consequence of centuries of racism and classism. Because the residents of Newark have been subjected to this treatment for so long, they have involuntarily become ill-equipped to manage their healthcare in any crisis situation. 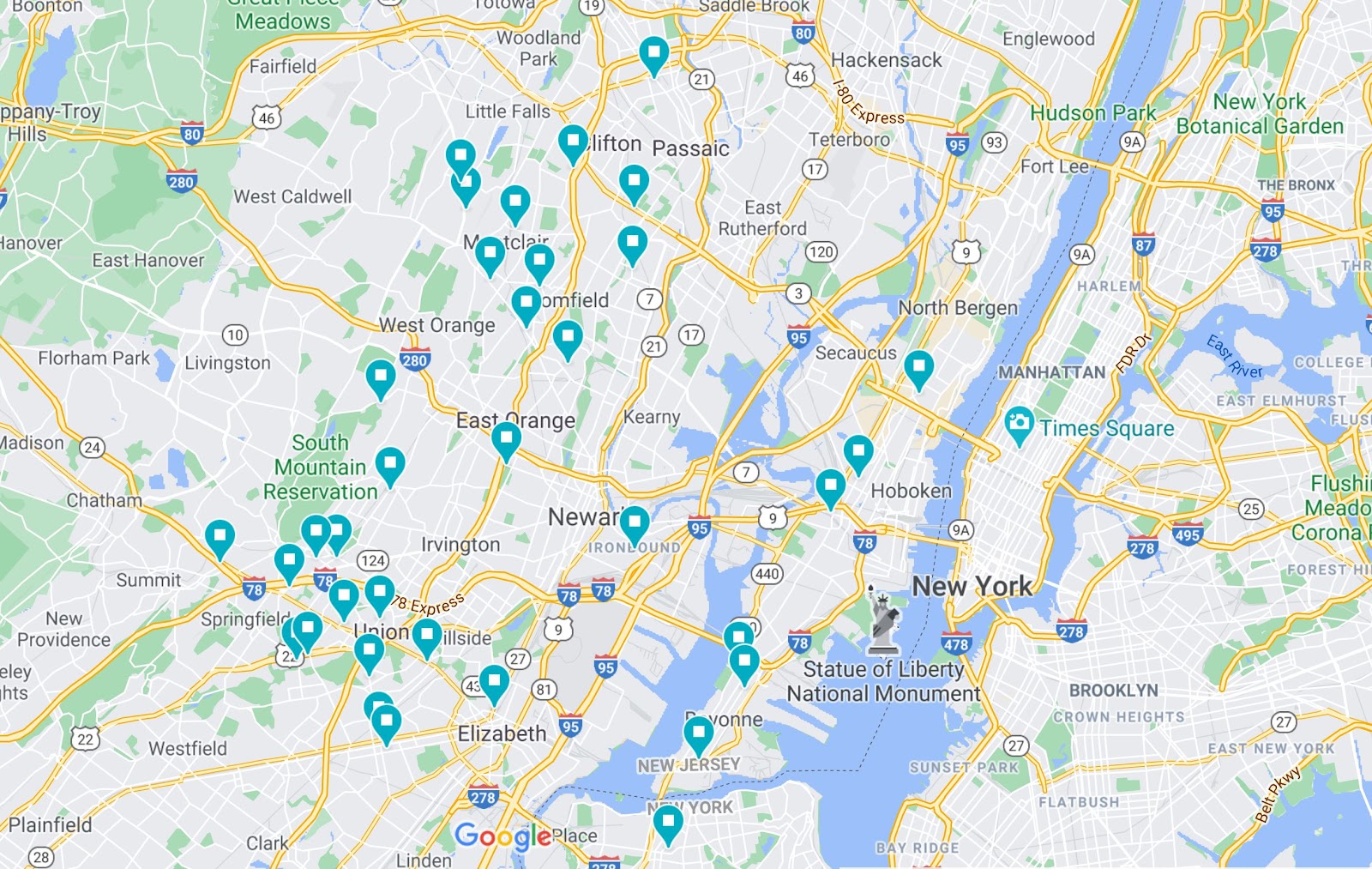 There are many services and luxuries that are bereft of people living in these areas and veterinary care is no exception. If you were to search “veterinarians in Newark, NJ” on any search engine, you will find exactly one licensed DVM office in the entire city. The largest city in New Jersey, with over 50,000 pet households and over 90,000 individual pets, and there is one doctor for all of them. Obviously, residents can travel outside the city for veterinary care as evident by the map to the right of all the vet places directly surrounding the city, but how do residents that rely on public transportation manage this? Over half of all the households in Newark do not own a vehicle, meaning that they would have to rely on costly taxi and Uber rides (also note that Uber and its contemporaries charge more for their rides in many areas considered dangerous because they pay the drivers more to go there). In addition to the astronomically high fees charged by some vet offices, a simple annual check-up becomes a financial burden for Newark residents. Those who cannot afford medical bills are often forced to either give their pets up, in which the owner suffers, or not treat their pets, in which the animal suffers. There is no victory here.

One observation that is particularly interesting is the services offered by Bully Zone Pet Supplies, a popular pet store in Newark catering to a broad range of pets yet focusing on bully breed dogs. These are dogs such as Bulldogs, Pit Bulls, Staffordshire Terriers, Bull Terriers, Cane Corsos, etc. that compose the overwhelming majority of dogs in Newark (need source). A common health problem with these breeds is cherry eye, or a condition in which the dog’s tear glands become inflamed. Normally, the issue has to be addressed surgically or at the very least with sedation at a vet office, yet this pet store offers “cherry eye removal” for a low cost. While there are not many details about the procedure from the store, one cannot help but fathom the safety and efficacy of performing this operation without the supervision of a licensed veterinarian, let alone the legality. However, a cherry eye surgery can cost hundreds if not thousands of dollars at a private vet office, and given the potential for severe complications if left untreated, it is no wonder that pet owners from a low-income community may be turning to riskier, low-cost options. Thus, the lack of affordable, veterinary access in the city has created immeasurable threats to both pet owners and the animals themselves.

Thus, the lack of veterinary care in the city of Newark is alarming and yet another unfortunate consequence of systematic oppression against the low-income POC community. Newark residents are unfairly put in situations where either they suffer or their pets do, which creates needless misery for people already subjected to injustice in everyday life. Pets should be a source of comfort and a means to relieve the pressure from environmental stressors or even a high social vulnerability index, yet Newark residents are devoid of these privileges.